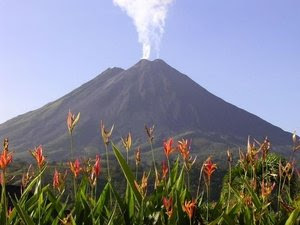 COSTA RICA
Arenal Volcano is an active andesitic (meaning that the rock has been crystallized from silicate minerals) stratovolcano in north-western Costa Rica, where Arenal is the youngest and most active of all the mountains. It was presumed extinct until July 29, 1968 when an earthquake caused it to erupt, after approximately 400 years of dormancy. Arenal rises 1657 m above sea level and overlooks Lake Arenal; both are part of Arenal Volcano National Park.
Diposting oleh Unknown di 7/25/2009 12:33:00 PM